skip to main | skip to sidebar

think you're funny, weather.com, don't you?

That's fine.
Play your little game for a few more days.
I know you're just trying to trick me.
It won't work.

Alright, weather.com
We may be able to be happy together.
You are predicting partly cloudy and 10% chance of precipitation for May 24th. This is pretty good. I'd prefer "Sunny" and 0%, so I'll give you a few days to adjust your outlook on this and check back.
I'm sure you won't disappoint me, right?

You have left me with no choice. I am going to have to divorce you, on the grounds of irreconcilable differences, if you continue down the road you are currently on. For now, we can try a trial separation-- believe me, I do not believe in divorce, and I want to make this work, but if you continue to try and sell me these:

well, who could blame me for leaving you?

Okay, I was also tagged by Melissa, and since Whitney did her answers late, I guess it’s not too late for me, either. Let me just warn you, that my high school experience, except for 10th grade, which was awesome (except for my new best friend’s old best friend almost dying), was pretty terrible; at least it seemed that way to me at the time. Now, I don't really understand what all the angst and depression was for, but I guess teenagers just aren't very rational.

Multiple High Schools… I can’t even remember the name of my 9th grade school, I just remember we were the Spartans. Then Northridge for 10th grade, and Blaine for 11th and part of 12th (I graduated early b/c I hate hate hated Blaine High School).

1. Did you date someone in high school?
No. I moved a lot, so I was always the new girl, and despite what movies & Twilight would have you believe, boys aren't lining up to show you around school or eat lunch with you. In 9th grade, I was the new girl, and had moved from California to Utah. There was a bit of culture shock. Then I moved from Ogden to Layton over the summer. I was lucky in 10th grade in the friend department, but not in the boy department. And then I was miserable in 11th grade because I moved from Utah to Minnesota and missed Whitney T. terribly, and I don't think depressed girls are very attractive to most teenage boys. And then I graduated early so 12th grade was pretty short.

2. What kind of car did you drive?
Didn’t drive in high school. I was deathly afraid of the responsibility it entailed.

3. Did you pass your driver's license test the first time?
No. It was kind of traumatic. My mother was pregnant and on bed rest and no one had time to drive with me for practice. I failed pretty bad and then my little brother made fun of me.

4. Were you a party animal?
See answer to number 1.

5. Were you considered a flirt?
Again, see number 1.

6. Were you in band, orchestra, or choir?
No

7. Were you a nerd?
I don’t think so, but I guess that depends on other people’s perceptions. I think I was just normal.

8. Did you ever get expended or expelled?
No.

9. Can you still sing your fight song?
Pfft, I have no idea what it was. I was very “anti” the whole high school spirit thing, as I hated my school.

10. Who were your favorite teachers?
Ms Smith in 9th grade, Mr. Kuzma in 11th grade. He helped me when I fainted after giving blood.

11. Where did you sit at lunch?
Almost identical answers to Whitney T’s: Sophomore year Whit and I sat in the commons, junior year is a total blank and senior year I was barely there.

12. What sports did you play?
I might have played volleyball, but since I was always moving, I always missed tryouts.

13. Were you on any varsity teams?
See above.

15. Did you go to homecoming and who with?
I think you know the answer to this one…

16. If you could go back and do it again, would you?
Well, my knee jerk response is "Hellllllllllll no! No!" I didn't have enough wisdom to appreciate things as they happened then, but who does at that age? I don't think going back and doing it again would make much sense, I learned what I needed to learn then and moved on. In general, I am not about "going back" for anything. I live in the present, enjoy this day for what it is, and keep an eye on future.

17. What do you remember most about graduation?
My 29 year old aunt dying the day before. All the family members that came from out of state to see me graduate were too grief stricken to actually come to the graduation. I really didn’t want to go, but they made me. I don’t even remember it, really.

18. Where did you go on Senior Skip Day?
I skipped the whole second half of senior year!

20. Have you gained weight since then?
Unfortunately, yes, lol.

22. Are you planning on going to your 10 year reunion?
It already happened, and no, I didn’t go.

23. Did you have a job while in high school?
Kind of, I worked full time the second half of my senior year, but I was done with school, so that probably doesn’t count. 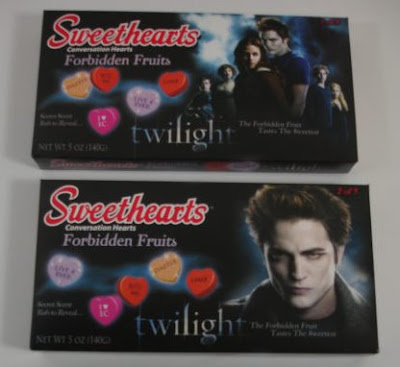 Yes, that's right-- I totally bought these. And they were delicious! My favorite ones? The "Edward" ones, of course-- they sparkle. 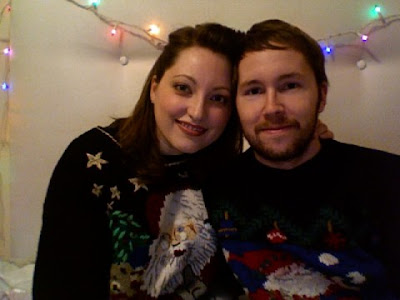 The Annual Fun with Kittehs Christmas cards are late, but will be sent out shortly, as promised. In the meantime, enjoy this one of me and John in our luverly Santa sweaters-- I know you're all jealous!

It's that time of year. Readers, I kid you not, I have been shocked about 20 times today. I am a static electricity generating factory. Someone should look into using me as an alternative source of energy. My cubicle has more metal then I realized. Go to file some paper work: zap. Hang up my coat: zap. Walk out of cube: zap. Really, I walked out of my cube, and a giant spark leapt from the anchor wall to shock me on my shoulder-- I didn't even touch it, it leapt out to get me. It's getting really old. I don't think I'm dragging my feet, I don't know what I can do to decrease my static. Maybe I'm dehydrated? I don't know if that even matters. So, while this is a great time of year, I could do with out all the shocking.